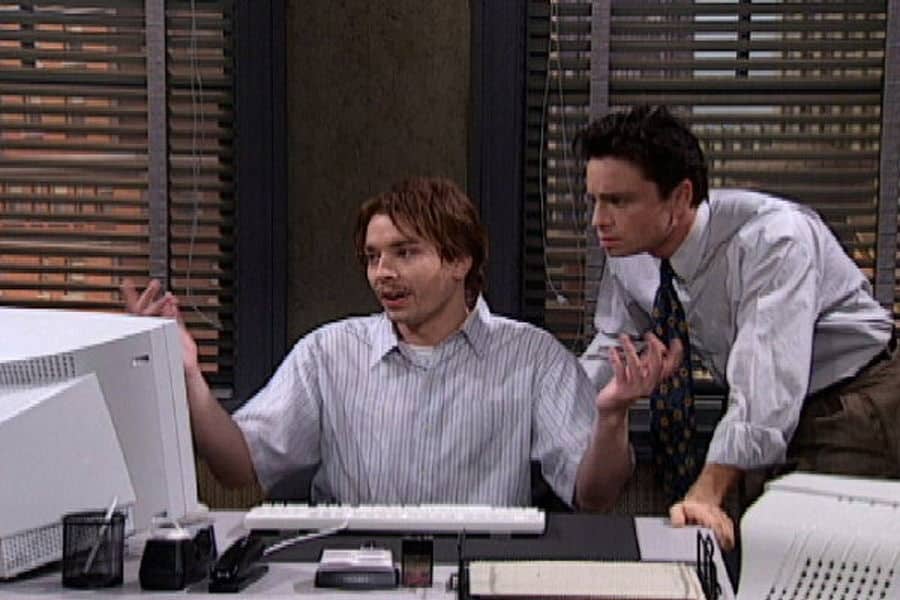 Your IT guy should understand your business

MOVE! Back in the 1990s when I was a wet behind the ears help desk tech working for the pocket protector punch card IT expert the culture definitely had an elitist attitude.  Back then there were all the smart IT guys and all the stupid users. They would show up at your desk speak a language of alphabet soup and make remarks that would be demeaning, patronizing and now be considered pretty hostile. Because of this Nick Burns was born.

Do not put up with IT guy Nick Burns

Jimmy nailed it and the skit was an instant classic because anyone that worked in an office knew at least one Nick Burns.  Furthermore, I can not tell you how many guys like this I worked with because there were too many to count. What I can tell you is that I was never that guy. Also, I did not become an IT guy like most others and actually got into computers by accident.

When I was in college there was no “online registration” and we had to stand in huge lines waiting to get our hands on these giant reams of “green-bar” paper reports. Due to the fact I was a freshman, undeclared and not an athlete  I pretty much got to pick last. It took forever and when I finally got to registering for my last class I needed an elective and the pickings where slim.  However, by chance I stumbled across a class labeled “Intro to Comput”. PERFECT! Intro to Computers! This would totally give me a leg up on writing papers if I knew how to use a computer.

The first day of class was something I will never forget. The class was small. Only about 20 students (all male) and they all looked exactly like a room full of  nerds would look in 1991. The professor had the pocket protector, matching coke bottle glasses and the first thing he said was, “Welcome to the Introduction of Computer Programming!”

Wait, what. Just as I was about to raise my hand he then says, “Anyone who was stupid enough to think this was Intro to Computers come on up and get a drop slip” and at the very moment half the class turns around and looks at me. So what do I do? I turn around and look at the guy behind me because there was no way I was going to give them the satisfaction of letting them know I was the stupid one he was talking about. But most importantly, I have never fogotten that sinking feeling I had that day and every day after  when some jerk of a computer guy talked down to me trying to impress me will his geek speak talking about stuff like his Mt-32 sound cards, megabytes and PCI buses, Blah, Blah, Blah…

I knew back then that I would never be that guy. Further more I didn’t know it then, but not wanting to conform to the computer guy stereotype would make me stand out during my career in corporate IT.

So, I made it a point to talk in everyday business terms and try to relate technical solutions and strategies with everyday terminology that everyone could understand. Over two decades of making sure I didn’t make anyone feel stupid when it came to technology was something I to pride in doing.

Today I am known for keeping things simple and painless while delivering superior results. Nick Burns is not today’s IT guy. If you have a Nick Burns it maybe time to rethink things.

IT guy needs to understand business

Today, the IT guys with the most value have a strong understanding of business. Sales, Marketing, and Leadership are among their talents. The capability to hear a business problem and apply a technical solution is what puts them far ahead of everyone else. Their ability to communicate, build teams, and find value in everyone are just more traits you should be demanding.

Of course many Nick Burns are still out there but they shouldn’t be on your payroll. Your IT guy should understand your business. Think big picture. Be a visionary, an innovator. They should inspire those around them and when it is all said and done they just Make IT Happen.

Albert Einstein infront of caulk board with the saying "more knowledge lesser the ego, lower the knowledge the more the ego" under the equation EGO equals one over knowledge